Navigation, Mapping, Clean Base, No-go lines, Room cleaning, Suction, Airflow. What about these terms? Do they have any effect on the operations of a robot vacuum? If yes, how? Continue reading to find out.

Navigation is a robot vacuum’s ability to freely roam to give full coverage in the deployed space. Typically the movement of a robot vacuum is either dumb or intelligent.

In other words, a robot vacuum that operates on dumb navigation–usually advertised as random/semi-random navigation–cleans without regard for its environment. As a result, cleaning is incomplete, inefficient, and stressful. Few examples include the pre-900 series Roombas and iLife V3s Pro, V5s Pro, and Deebot N79s and 500.

Because of their smart navigation, these robot vacuums are precise in cleaning debris anywhere they might be hiding (along walls, under cabinets, in open areas, etc.). Examples of robot vacuums with intelligent navigation include the Roborock S series (S4, S5, S6, S6 Pure, S5 Max, and S6 MaxV) and the Roomba (900, I, and S models).

Mapping is a robovac’s ability to learn and remember the layout of a house. The robot’s understanding of a home floor plans is then captured as some sort of graph or map, similar to the below: Depending on the model or make you may or may not be able to make changes to the map.

Roomba 960, 980, i3 and the E-series Roborock maps but the same can’t be seen or adjusted in the app. Nonetheless, the mapping function in these units enables them to clean in neat, straight rows. They’re more careful around furniture, baseboard, etc. Also, they clean in sequence, therefore, are able to cover the entire area.

Interactive Mapping takes things a step further by making the generated map available for customizations in the app. With robots of interactive mapping capability you can:

Remember that the number of runs it will take to generate a map of your house also relates to the accuracy of the map (robots with lidar technology seems to generate maps faster and more accurately) and the interactive mapping features supported varies from models and manufacturers.

Roborock while it currently doesn’t support room naming, its s5 robovac for example can save three maps while the s5 max can save four maps.

Similarly, Shark’ IQs interactive mapping supports room naming and no-go line but can currently only hold one map. Yet there’s a certain Roomba i7 that allows saving of up to ten maps!

Light Detection And Ranging (LIDAR) and Visual Simultaneous Localization And Mapping (VSLAM) is the brain of a mapping robot vacuum. The Roomba i7 is an example of a smart vac that runs on VSLAM; the Roborock S5 Max runs on LIDAR, and Deebot 960, T5, T8, and S6 MaxV runs on both.

Perhaps it’s worth mentioning that the LIDAR based robovacs generate floor maps quickly, are more precise in their movement, and faster at cleaning.

Robots running on the VSLAM aka camera navigation on the other hand, while they take time to map a floor plus they may struggle under low light condition are nonetheless future-proof.

Watch this video to gain better insight into the two types of mapping technologies:

Different brands have different names for this function.

Roborock called it Reactive AI while Ecovacs called it AIVI. In any case, the object avoidance is the function of a floor robots. Available in different models in particular, the Roborock S6 MaxV and Ecovacs T8 AIVI is an advanced feature of a robotic vacuum that lets it see objects (power cords, shoestrings, poop, etc.) in its path while avoiding them in real-time.

Below is a demo of the obstacle detection and avoidance feature of the Roborock S6 MaxV:

Carpet Detection is a feature that allows a robot to recognize carpet or rug and increase suction (in vacuuming mode aka Carpet Boost) or avoid the same (in mopping mode).

Suction is the force a robot vacuum releases into an area of the floor to get the dust and dirt to loosen up. Airflow is the force the robot vacuum uses to pull those mess in. Suction power and airflow especially applies to carpet vacuuming. 1500+ (Pa) of suction and 15+ airflow (CFM) is typical on some of the best carpet robot vacuums.

The Dirt Detect technology found in select models enables the robot to recognize areas needing special attention as per the pile level. The robot will focus its cleaning efforts on these areas until the sensor detects reduced specks of dirt. Most Roombas have the Dirt Detect function.

Robots with the full bin technology know when their bin is full hence will stop vacuuming and call in help. Robots without the full bin indicator when fill will continue vacuuming, leaving globs of hair and other debris behind as a result.

It’s advisable that a robot vacuum without the full bin sensor should only be used in a space with light debris, probably one where you’ve run the hand vacuum through beforehand. However, if you’re allowing a robot without the full bin technology into a very messy area, then make sure you get a model with the self-emptying function.

The Roomba i7+ and s9+, Shark IQ, Ozmo T8, and the Proscenic M7 Pro are a few of the currently available self-emptying robot vacuums.

The no-go lines, aka app-based barriers, which becomes available after the bot must have mapped the house, is a convenient way to keep the machine out of troubled spots without using the unsightly virtual walls or magnetic strips.

Zone or room cleaning is a handy way of selecting individual rooms of the house for cleaning. This is particularly helpful if you spill coffee grounds in the kitchen or just want to get some of the cat hair out of the living room rug in a pinch.

Hands-free cleaning is the ability of a robot vacuum or mop to complete a cleaning job with little or no human intervention. Robotic vacuum and mop cleaners that support effortless cleaning have functions to include mapping, intelligent navigation, automated mop cleaner, recharge & resume, recharge, evacuate & resume, and smart-top. 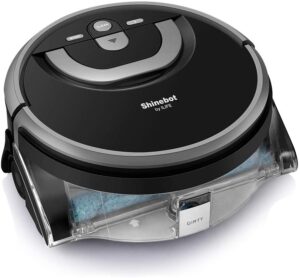 VIEW CURRENT PRICE OF THE iLIFE SHINEBOT W400 ON AMAZON

Smart Interlinking or Imprint Technology enables the Braava Jet M6 to automatically mop after the Roomba i7 or s9. It makes sense because, as the robot vacuum is picking pet fur, you can as well get the mopping function into action to help with pet track-in muddy paw stains on your dark floors.

Both Clean Base types claim to hold up to 30 runs of dirt.

Which is better will mostly depend on your priorities and budget. If you prioritize air quality, though, the bagged Clean Base at a much higher cost of maintenance is more than perfect.

The loudness or quietness of a robot vacuum depends for the most part on its motor and the flooring being cleaned (the loudest noise is heard on carpets given more suction is often required).
That mentioned, and with many brands producing a mix of high sound and low sound robotic cleaners, We have eufy and Roborock to be increasingly consistent in producing quiet robovacs.

There are soft as well as hard floors.

With hardwood being the easiest to clean, which is why even the beginner robot vacuums would do a decent job. Carpets and rugs, on the other hand, require the vacuuming power of the advanced robot vacuums.

Another word for the dock is the charging station.

Docking is the ability of a robot vacuum to recharge automatically. To ensure proper docking, instructions regarding the positioning of the dock as recommended by the manufacturer in the buyer’s manual should be heeded.

Aka auto top-up. This is a robovac’s ability to go back to its charging base to juice up and resume cleaning mission exactly where it left off without human intervention.

Smart recharging and resuming is a function available in advanced iRobot (i7 & s9) and Roborock (S6, S5 Max & S6 MaxV) that aims to cut recharge time to just as long as it’s needed to complete cleaning jobs as against full charge. As a result, cleaning is much faster, especially in large areas.